This seems to be an apt quote in the case of Piccadily Agro (PAL). I had a look at this stock idea about a year back and was stupid to give it a go thinking it to be just another Sugar company. Since then the stock has tripled and yet looks to be a very interesting stock idea with lot of potential.

Piccadily Agro Limited started off as an Sugar company in Haryana and the performance paralleled to the cycles of Sugar Sector. In 2008, the company ventured into Country Liquor business and the same seems to have done wonders for the company. Have a look at the financial performance till 2007 and then since 2007: 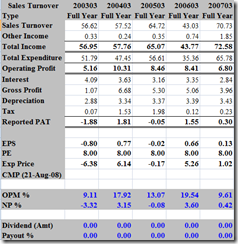 To understand the reasons for sharp increase in profits have a look at their segment results:

Since 2007, PAL has restricted itself on the Sugar Business, which wasn’t creating money for them. The growth has been coming from the Alcohol business which has been growing at about 100% p.a. for last 3 years. It’s remarkable that within 5 years, PAL has been able to achieve 150 Cr turnover in the Country Liquor business starting from scratch in 2008.

Another notable thing is the operating margins the company has been getting in the Country Liquor business. If the Operating Margins are to remain at around 20-22%+ levels then the business will become extremely attractive and a hue PE re-rating might happen.

Valuations at CMP of 46: 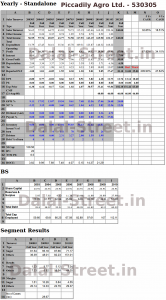